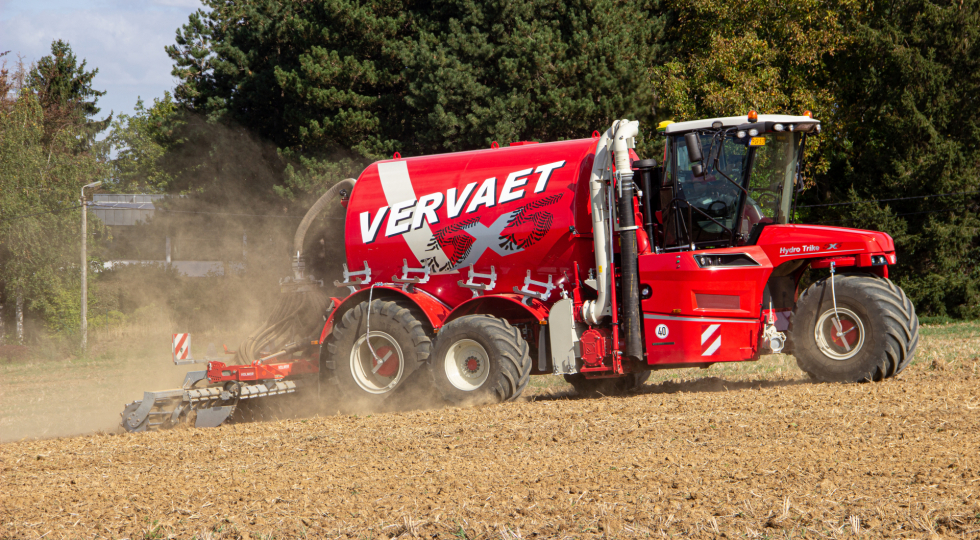 Dutch specialist equipment manufacturer Vervaet is currently testing a five-wheel-drive version of its popular Hydro Trike self-propelled spreader. This new option, which will be available for 2021, utilises an updatedpowertrain along with other improvements. This new all-wheel-drive configuration will be particularly advantageous when working on hilly terrain.

From a distance the new machine doesn’t appear much different to any other Vervaet Hydro Trike, with the same striking lines and innovative features, but operators of current machines will notice several changes. The main new features are the option of driven mid-wheels and a completely renewed powertrain. This incorporates fully electronic traction control, an electronically-controlled flow divider between the front wheel drive and rear axle and larger diameter hydraulic pipes. The mid-axle is also modified with a new stabilisationand suspension system for better operator comfort.

Power and traction over 4.5 meters, perfect for steep hills

With these innovations Vervaet has answered the demands and requirements of its customers. The well-known five-wheel concept has already more than proven itself, combining the single front wheel’s excellent maneuverability with the even ground pressure across the full 4.5m width provided by the additional mid-axle. These advantages are beyond doubt great on grassland, but are also exceptionally valuable when working on bare ground and in growing crops.

The new Hydro Trike 5x5 comes into its own when working on hilly and undulating terrain, further extending the machine’s capabilities. With the 5x5 fertilizer application is now possible on hillsides, where all-wheel drive is the all-important solution, according to customers. Vervaet claims that driving all five wheels also saves fuel when working on loose cultivated land. The company’s design engineers have taken a through approach so that the new drive system is completely integrated into the well-loved Hydro-Trike. The stunning result can be seen for the first time at Agritechnica in Germany.

VSG is the first step

Vervaet already launched the VSG drive system earlier this year which employs two hydraulic motors to power the rear axle. These are interconnected by a wet plate clutch so that both provide drive when the machine is accelerating and during field-work when the pumps provide high oil volumes for maximum power. Once up to speed the machine’s electronics control the oil flow so that the second motor only provides as much power as required. When on the road the system disengages one of the motors.

This all takes place automatically and on-the move, so that the machine can be driven at speed on the headland with an empty tank for example, without having to stop and switch from field to transport range. In addition the Trike’s 40kph top speed can be reached with the engine running at just 1200rpm rather than at around 1400rpm.

A disadvantage of a conventional hydrostatic transmission is that the oil follows the path of least resistance. As soon as one of the wheels slips, more oil flows through this drive motor, resulting in reduced power to the other wheels. Vervaet already had this well under control with its Traction Control system which allowed the driver to control the power distribution between the front wheel and rear axle. However, this manual system needs a skilled operator, as an incorrectly set balance can be inefficient. On the Trikes for 2021 a fully electronic traction control system replaces this manual setup. Sensors measure each wheel’s speed and send more oil to the wheel with most traction. This advanced system also automatically controls the mid-axle’s ground pressure, so that if the rear wheels slip it puts more weight on them by slightly raising the mid-axle. Previously the operator controlled this manually. A new flow divider automatically regulates the oil flow between the front and rear axles when wheel slip is detected, and all hydraulic pipes are larger for quieter and more efficient operation.

130hp on the center axle

Drive to the mid-wheels is provided by a self-contained system with a 175-litre-per-minute hydraulic pump capable of providing an impressive 130hp. A new three-point suspension system replaces leaf springs with repositioned shock absorbers at the front of the axle. An inclination sensor, which detects whether the machine is on a side-hill, allows the system to automatically lock the suspension on the far side.

On top of these innovations, the new Trike also heralds the arrival of the latest 530hp Paccar engines which will be fitted as standard from next season. There is also an improved touchscreen display inside the cab.

The new prototype clearly shows that Vervaet has once again examined the entire machine, front to back, with other additional small improvements. For example, the injector’s hydraulic valve block is repositioned to a recess underneath the tank, reducing pipework. There is a new platform behind the cab, the hydraulic cooler is installed lower and the exhaust is positioned more centrally, these changes all come together to improve the operator’s view especially when looking back at the wings of a wide injector.

The air intake is also repositioned to draw cleaner air, the hydraulic oil tank is easier to reach and the batteries are moved to the nose. Finally, the pumps can be removed more easily, with only two bolts, and the tire pressures of each axle can be altered independently. Vervaet will debut this latest version of the Hydro Trike XL at Agritechnica with pre-production machines being thoroughly proven next year. The innovations will enter production in phases over 2020 and 2021. Prices are not yet known.